Dr. Foster has served as Minister of Administration of Ferguson Memorial Baptist Church since 1997.  Additionally, she developed and led the Kanawha Institute for Social Research & Action, Inc. (KISRA), the church’s community economic development initiative from September 1998 to February 2016.  Dr. Foster is currently the President and CEO of The Greater Kanawha Valley Foundation in Charleston, West Virginia. She has a doctorate in community economic development. 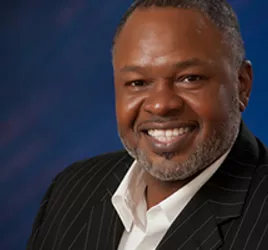 Pastor Jones was born on July 10, 1967 to Johnny Jones and Beatrice Hart (both deceased) in Augusta, Georgia.  He is the fourth of eight children. He is a graduate of Lucy C. Laney High School and West Virginia State College, where he acquired a Bachelor of Science Degree in Communications and a Minor in English.

Pastor Jones gave his life to Christ on December 22, 1991, at the Union Missionary Baptist Church in Muncie, Indiana.   He loves sports, music, and working with children.

Pastor Jones has been a member of Ferguson Baptist Church since 1994 and has served in various capacities.  He is the proud father of two beautiful daughters- Bianca and Briana Washington.  Most importantly, He is saved and filled with the Holy Ghost.

It was in April 2001 that Pastor Jones accepted his call to the ministry. He is the Interim CEO of the Kanawha Institute for Social Research & Action, Inc. (KISRA)